Influenzaviruses A, B and C are very similar in overall structure. The virus particle is 80–120 nanometres in diameter and usually roughly spherical, although filamentous forms can occur. These filamentous forms are more common in influenza C, which can form cordlike structures up to 500 micrometres long on the surfaces of infected cells. However, despite these varied shapes, the viral particles of all influenza viruses are similar in composition (see figure 1 and 2). These are made of a viral envelope containing two main types of glycoproteins, wrapped around a central core. The central core contains the viral RNA genome and other viral proteins that package and protect this RNA. RNA tends to be single stranded but in special cases it is double. Unusually for a virus, its genome is not a single piece of nucleic acid; instead, it contains eight pieces of segmented negative-sense RNA, each piece of RNA containing either one or two genes. For example, the influenza A genome contains 11 genes on eight pieces of RNA, encoding for 11 proteins: hemagglutinin (HA), neuraminidase (NA), nucleoprotein (NP), M1, M2, NS1, NS2(NEP), PA, PB1, PB1-F2 and PB2 (see figure 1).

Figure 1. Structure of the influenza virion. The hemagglutinin (HA) and neuraminidase (NA) proteins are shown on the surface of the particle. The viral RNAs that make up the genome are shown as red coils inside the particle and bound to Ribonuclear Proteins (RNPs). 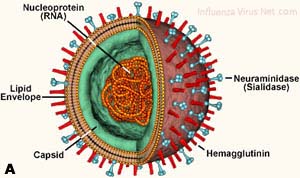 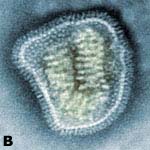 Figure 2. Structure of the influenza virion (A) and an Electron Microscope image of the virus (B). The hemagglutinin (HA) and neuraminidase (NA) proteins are shown on the surface of the particle. The viral RNAs that make up the genome are shown as red coils inside the particle and bound to Ribonuclear Proteins (RNPs).

Hemagglutinin (HA) and neuraminidase (NA) are the two large glycoproteins on the outside of the viral particles. HA is a lectin that mediates binding of the virus to target cells and entry of the viral genome into the target cell, while NA is involved in the release of progeny virus from infected cells, by cleaving sugars that bind the mature viral particles. Thus, these proteins are targets for antiviral drugs. Furthermore, they are antigens to which antibodies can be raised. Influenza A viruses are classified into subtypes based on antibody responses to HA and NA. These different types of HA and NA form the basis of the H and N distinctions in, for example, H5N1. There are 16 H and 9 N subtypes known, but only H 1, 2 and 3, and N 1 and 2 are commonly found in humans (see figure 3). 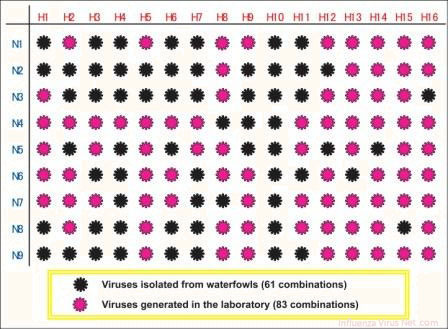