Signs and Symptoms of H5N1

The avian influenza hemagglutinin binds alpha 2-3 sialic acid receptors while human influenza hemagglutinins bind alpha 2-6 sialic acid receptors. This means that when the H5N1 strain infects humans it will replicate in the lower respiratory tract, and consequently will cause viral pneumonia (see figure 1). There is as yet no human form of H5N1, so all humans who have caught it so far have caught avian H5N1. In general, humans who catch a humanized Influenza A virus (a human flu virus of type A) usually have symptoms that include fever, cough, sore throat, muscle aches, conjunctivitis, and, in severe cases, breathing problems and pneumonia that may be fatal. The severity of the infection depends to a large part on the state of the infected person's immune system and whether the victim has been exposed to the strain before (in which case they would be partially immune). No one knows if these or other symptoms will be the symptoms of a humanized H5N1 flu. 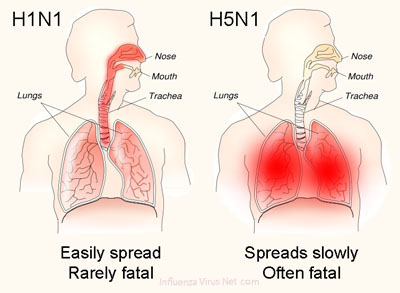 Figure 1. The different sites of infection (shown in red) of seasonal H1N1 versus avian H5N1. This influences their lethality and ability to spread.


The reported mortality rate of highly pathogenic H5N1 avian influenza in a human is high; WHO data indicates that 60% of cases classified as H5N1 resulted in death. However, there is some evidence that the actual mortality rate of avian flu could be much lower, as there may be many people with milder symptoms who do not seek treatment and are not counted.

In one case, a boy with H5N1 experienced diarrhea followed rapidly by a coma without developing respiratory or flu-like symptoms. There have been studies of the levels of cytokines in humans infected by the H5N1 flu virus. Of particular concern is elevated levels of tumor necrosis factor-alpha, a protein that is associated with tissue destruction at sites of infection and increased production of other cytokines. Flu virus-induced increases in the level of cytokines is also associated with flu symptoms including fever, chills, vomiting and headache. Tissue damage associated with pathogenic flu virus infection can ultimately result in death. The inflammatory cascade triggered by H5N1 has been called a 'cytokine storm' by some, because of what seems to be a positive feedback process of damage to the body resulting from immune system stimulation. H5N1 induces higher levels of cytokines than the more common flu virus types.