Replication of the Influenza Virus

Viruses can only replicate in living cells. Influenza infection and replication is a multi-step process: firstly the virus has to bind to and enter the cell, then deliver its genome to a site where it can produce new copies of viral proteins and RNA, assemble these components into new viral particles and finally exit the host cell.

Influenza viruses bind through hemagglutinin onto sialic acid sugars on the surfaces of epithelial cells; typically in the nose, throat and lungs of mammals and intestines of birds (Stage 1 in figure 1). After the hemagglutinin is cleaved by a protease, the cell imports the virus by endocytosis.

Once inside the cell, the acidic conditions in the endosome cause two events to happen: first part of the hemagglutinin protein fuses the viral envelope with the vacuole's membrane, then the M2 ion channel allows protons to move through the viral envelope and acidify the core of the virus, which causes the core to dissemble and release the viral RNA and core proteins. The viral RNA (vRNA) molecules, accessory proteins and RNA-dependent RNA polymerase are then released into the cytoplasm (Stage 2). The M2 ion channel is blocked by amantadine drugs, preventing infection. 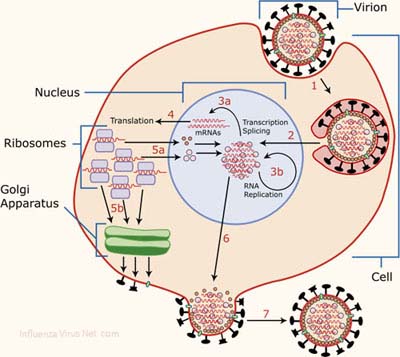 Figure 1. Host cell invasion and replication by the influenza virus.


These core proteins and vRNA form a complex that is transported into the cell nucleus, where the RNA-dependent RNA polymerase begins transcribing complementary positive-sense vRNA (Steps 3a and b). The vRNA is either exported into the cytoplasm and translated (step 4), or remains in the nucleus. Newly synthesised viral proteins are either secreted through the Golgi apparatus onto the cell surface (in the case of neuraminidase and hemagglutinin, step 5b) or transported back into the nucleus to bind vRNA and form new viral genome particles (step 5a). Other viral proteins have multiple actions in the host cell, including degrading cellular mRNA and using the released nucleotides for vRNA synthesis and also inhibiting translation of host-cell mRNAs.

Negative-sense vRNAs that form the genomes of future viruses, RNA-dependent RNA polymerase, and other viral proteins are assembled into a virion. Hemagglutinin and neuraminidase molecules cluster into a bulge in the cell membrane. The vRNA and viral core proteins leave the nucleus and enter this membrane protrusion (step 6). The mature virus buds off from the cell in a sphere of host phospholipid membrane, acquiring hemagglutinin and neuraminidase with this membrane coat (step 7). As before, the viruses adhere to the cell through hemagglutinin; the mature viruses detach once their neuraminidase has cleaved sialic acid residues from the host cell. Drugs that inhibit neuraminidase, such as oseltamivir, therefore prevent the release of new infectious viruses and halt viral replication. After the release of new influenza viruses, the host cell dies. 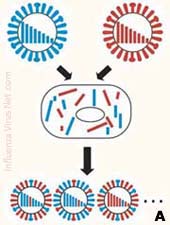 Figure 2. (A) If a cell is infected with two different influenza viruses, the RNAs of both viruses are copied in the nucleus. When new virus particles are assembled at the plasma membrane, each of the 8 RNA segments may originate from either infecting virus. The progeny that inherit RNAs from both parents are called reassortants. (B) The underlying concern is that swine are susceptible to a wide variety of influenza viruses, and are thought to make excellent `mixing vessels’ for influenza stains. Although the odds of it happening are probably very low, the worry is that a pig could be infected by two different influenza strains simultaneous, and a reassortment of the viruses could take place. The result could be a new, or mutated, flu virus.


Because of the absence of RNA proofreading enzymes, the RNA-dependent RNA polymerase that copies the viral genome makes an error roughly every 10 thousand nucleotides, which is the approximate length of the influenza vRNA. Hence, the majority of newly manufactured influenza viruses are mutants; this causes "antigenic drift", which is a slow change in the antigens on the viral surface over time. The separation of the genome into eight separate segments of vRNA allows mixing or reassortment of vRNAs if more than one type of influenza virus infects a single cell (see figure 2). The resulting rapid change in viral genetics produces antigenic shifts, which are sudden changes from one antigen to another. These sudden large changes allow the virus to infect new host species and quickly overcome protective immunity. This is important in the emergence of pandemics.