The first influenza pandemic was recorded in 1580; since this time, various methods have been employed to eradicate its cause. The etiological cause of influenza, the orthomyxoviridae was finally discovered by the Medical Research Council (MRC) of the United Kingdom in 1933.

In the world wide Spanish flu pandemic of 1918, "Physicians tried everything they knew, everything they had ever heard of, from the ancient art of bleeding patients, to administering oxygen, to developing new vaccines and sera (chiefly against what we now call Hemophilus influenzae—a name derived from the fact that it was originally considered the etiological agent—and several types of pneumococci). Only one therapeutic measure, transfusing blood from recovered patients to new victims, showed any hint of success."In 1931, viral growth in embryonated hens' eggs was reported by Ernest William Goodpasture and colleagues at Vanderbilt University. The work was extended to growth of influenza virus by several workers, including Thomas Frances, Wilson Smith and Macfarlane Burnet, leading to the first experimental influenza vaccines. In the 1940s, the US military developed the first approved inactivated vaccines for influenza, which were used in the Second World War. Greater advances were made in vaccinology and immunology, and vaccines became safer and mass-produced. Today, thanks to the advances of molecular technology, we are on the verge of making influenza vaccines through the genetic manipulation of influenza genes (see figure 1). 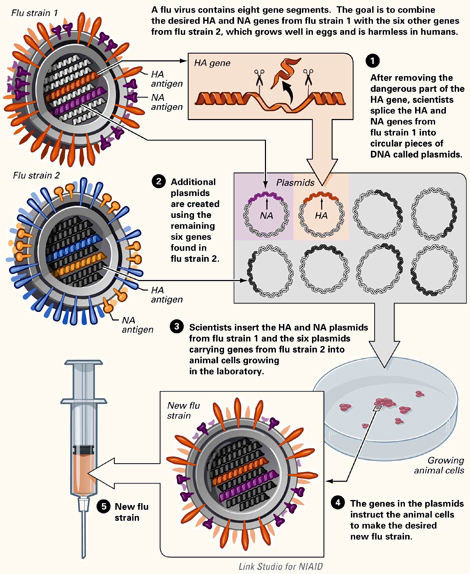