Mortality of the Spanish Flu Pandemic

The global mortality rate from the 1918/1919 pandemic is not known, but it is estimated that 10% to 20% of those who were infected died. With about a third of the world population infected, this case-fatality ratio means that 3% to 6% of the entire global population died. Influenza may have killed as many as 25 million in its first 25 weeks. Older estimates say it killed 40–50 million people while current estimates say 50—100 million people worldwide were killed. This pandemic has been described as "the greatest medical holocaust in history" and may have killed more people than the Black Death.

Tafari Makonnen (the future Haile Selassie) was one of the first Ethiopians who contracted influenza but survived, although many of his subjects did not; estimates for the fatalities in the capital city, Addis Ababa, range from 5,000 to 10,000, or higher, while in British Somaliland one official estimated that 7% of the native population died.

This huge death toll was caused by an extremely high infection rate of up to 50% and the extreme severity of the symptoms, suspected to be caused by cytokine storms. Symptoms in 1918 were so unusual that initially influenza was misdiagnosed as dengue, cholera, or typhoid. One observer wrote, "One of the most striking of the complications was hemorrhage from mucous membranes, especially from the nose, stomach, and intestine. Bleeding from the ears and petechial hemorrhages in the skin also occurred." The majority of deaths were from bacterial pneumonia, a secondary infection caused by influenza, but the virus also killed people directly, causing massive hemorrhages and edema in the lung. 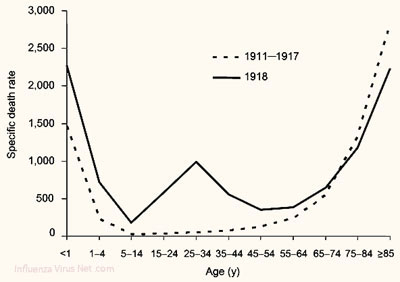 Figure 1. The difference between the influenza mortality age-distributions of the 1918 epidemic and normal epidemics. Deaths per 100,000 persons in each age group, United States, for the interpandemic years 1911–1917 (dashed line) and the pandemic year 1918 (solid line).

The unusually severe disease killed between 2% and 20% of those infected, as opposed to the usual flu epidemic mortality rate of 0.1%. Another unusual feature of this pandemic was that it mostly killed young adults (see figure 1), with 99% of pandemic influenza deaths occurring in people under 65, and more than half in young adults 20 to 40 years old (see figure 1). This is unusual since influenza is normally most deadly to the very young (under age 2) and the very old (over age 70), and may have been due to partial protection caused by exposure to the previous Russian flu pandemic of 1889.

Patterns of Fatality the 1918 Flu Pandemic

Typical influenzas kill weak individuals, such as infants (aged 0–2 years), the elderly, and the immunocompromised. Older adults may have had some immunity from the earlier Russian flu pandemic of 1889. Another oddity was that the outbreak was widespread in the summer and autumn (in the Northern Hemisphere); influenza is usually worse in winter.

In fast-progressing cases, mortality was primarily from pneumonia, by virus-induced pulmonary consolidation. Slower-progressing cases featured secondary bacterial pneumonias, and there may have been neural involvement that led to mental disorders in some cases. Some deaths resulted from malnourishment and even animal attacks in overwhelmed communities.

The second wave of the 1918 pandemic was much deadlier than the first (see figure 2). The first wave had resembled typical flu epidemics; those most at risk were the sick and elderly, while younger, healthier people recovered easily. But in August, when the second wave began in France, Sierra Leone and the United States, the virus had mutated to a much deadlier form. This has been attributed to the circumstances of the First World War. In civilian life evolutionary pressures favour a mild strain: those who get really sick stay home, and those mildly ill continue with their lives, go to work and go shopping, preferentially spreading the mild strain. In the trenches the evolutionary pressures were reversed: soldiers with a mild strain remained where they were, while the severely ill were sent on crowded trains to crowded field hospitals, spreading the deadlier virus.

So the second wave began and the flu quickly spread around the world again. It was the same flu, in that most of those who recovered from first-wave infections were immune, but it was now far more deadly, and the most vulnerable people were those who were like the soldiers in the trenches—young, otherwise healthy adults. Consequently, during modern pandemics, health officials pay attention when the virus reaches places with social upheaval, looking for deadlier strains of the virus.